As a local restaurant in my Ohio hometown would say, “We treat strangers like friends, and friends like family.”

As each board member arrived to the Portland Oregon International Airport each of us discovered just how much of the territory was foreign.  However, after meeting with each other at baggage claim number four we felt right at home.  Our first stop on our Great Oregon Adventure took place in Silverton, Oregon where we then toured Silver Falls State Park, strolled the very eccentric tourist town, and viewed the various fruit agriculture the town had to offer.  The next day of adventuring began with breakfast at a local farm to table restaurant before heading down to Klamath Falls, Oregon, the host location for the weekends show.  Following the check-in of 45 head of cattle between the junior and open shows, meeting up with some junior board candidates, and visiting with the rest of the membership, we headed to the Stilwell Ranch about 20 minutes from the grounds.  The Stilwell’s prepared a delicious meal for the show attendees and exhibitors, and President Ethan Freund auctioned off various items to benefit the Western Limousin Exposition.  Our third day of our grand adventure occurred in the wee morning hours on the grounds, the junior members took part in various activities including: the exploding watermelon challenge, a team relay race, and the legendary water balloon fight.

Then came our junior show, our judge was Mr. Wade Beckman of Idaho he sorted junior bulls, cow-calf pairs, and multiple females.  Our show concluded late in the afternoon, but the fun had not ended yet.  Each year the Western Limousin Association holds an auction to benefit the continuation of the show.  The items offered included: many gift baskets, various pieces of jewelry, decorative items, and breeding packages on different bulls.  The final day of our adventure began with the open Limousin show, judged by Mr. Clint Sexton of Utah.  Following the conclusion of the show, the team traveled to Crater Lake, just 75 miles north of Klamath Falls, not only did we get to experience the beauty of the lake but we also got to observe the history of it.

The conclusion of our journey was bittersweet as we traveled back to Portland, Oregon to depart back to our home states. As board members, we do an abundance of traveling but I think we all can agree there is not another experience quite as rich in variety as traveling to the Western Regional Exposition.  You really do come in as strangers and leave as friends when making the trip to Klamath Falls to visit the Western Limousin Family!

Eastern Regional, in Murfreesboro Tennessee, is a show many limousin breeders look forward to prepare their calves for the National Show just a short month later. Families from Tennessee, Louisiana, Kentucky, and many other states join together for a short weekend to catch up with friends, make new ones, and show some great cattle. 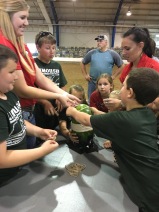 On Friday June 1st, after checking in over 70 head of cattle, the juniors got to loosen up and have some fun by blowing up watermelons, painting with their hands, and partaking in the famous annual water balloon fight. Later that evening, we all devoured a great meal and enjoyed a benefit auction to support the Tennessee Junior Association. Show supplies, window paintings, and farm toys were only some of the auction items participants fought for in bidding wars.

The following days the juniors worked hard in the ring to display their cattle and took pleasure in competing with each other.  Divisions consisted of bred and owned, lim-flex females, pure-bred females, bulls, cow-calf pairs, and prospect/progress steers for those two exciting days and were judged by Zach Butler from Lebanon, Tennessee and Lydell Meier from Clinton, Tennessee.  Although some may not have received the place they wanted, I personally witnessed some amazing acts of kindness, encouragement, and good sportsmanship among this group of juniors.

The Heartland regional is a staple for many in the Midwest. Generations of families have shown at Heartland which makes it an annual trip for most. This year the Heartland regional show took place in Council Bluffs, IA. The family atmosphere was contagious and made me feel right at home. On the first day, following check in, the junior activities at this regional show included games of partner balloon pop, blob, pie a director, and the kids overall favorite the water balloon fight.

Following the Stock Show U clinic heartland provided everyone with a delicious meal thanks to their sponsors. In addition to the meal, a benefit auction was held to raise money for the juniors of the Heartland

Association. On a long and hot show day the juniors were all smiles from start to finish. Watching the parents ringside coach their children and all the good jobs that were given by other showmen shows the encouragement and sportsmanship that takes place at this regional. The Heartland regional is a staple for many and for others it’s the start of a tradition.