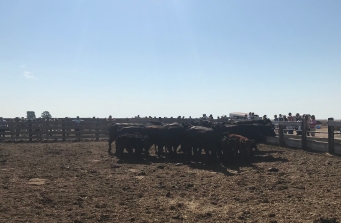 The attendees had another early morning as they boarded the bus and headed south to Fillmore Ranch. Immediately when everyone arrived they jumped on the buses and gave a quick tour and talked about their ranch. Fillmore Ranch has been in Boone, Colorado for 101 years. They used to raise Charolais until 2002, when they bought their first registered Limousin heifers. They decided the Limousin breed was the best fit for what they were trying to do. On their ranch they have around 400 head of cattle. They sell about 80 bulls each year, and around 80% of the bulls they sell go to buyers within a 200 to 300-mile radius. They also discussed the struggles of living in a dry area and what steps they take to keep their operation running successfully.  After they talked about their ranch, we had a delicious lunch and hopped back on the bus and headed to the Olympic Training Center.

The Olympic Training Center was astonishing. After enjoying a 15-minute video about the training center, we set off on our tour. We visited the Ted Stevens Sport Services Center, Aquatics Center, the wrestling gym, as well as the shooting center. It was a very interesting tour to see not only the facilities, but athletes in training as well. We headed back to the hotel, and the attendees had a free night to enjoy the night as they wished! 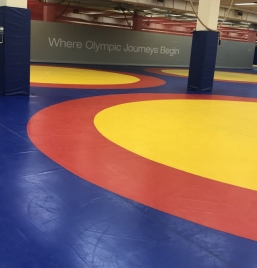 View all posts by nalja76